Please Note:  This event is different from the Orchard Beach Concert Series with live bands at the main stage kiosk in Section 9.
Click Here for the Concert event.

This event is in Section 4 - 5 and is DJ only playing pure salsa, running for more than 50 years.
Click Here for newspaper article about this event.

Click Here for TV news story about this event. 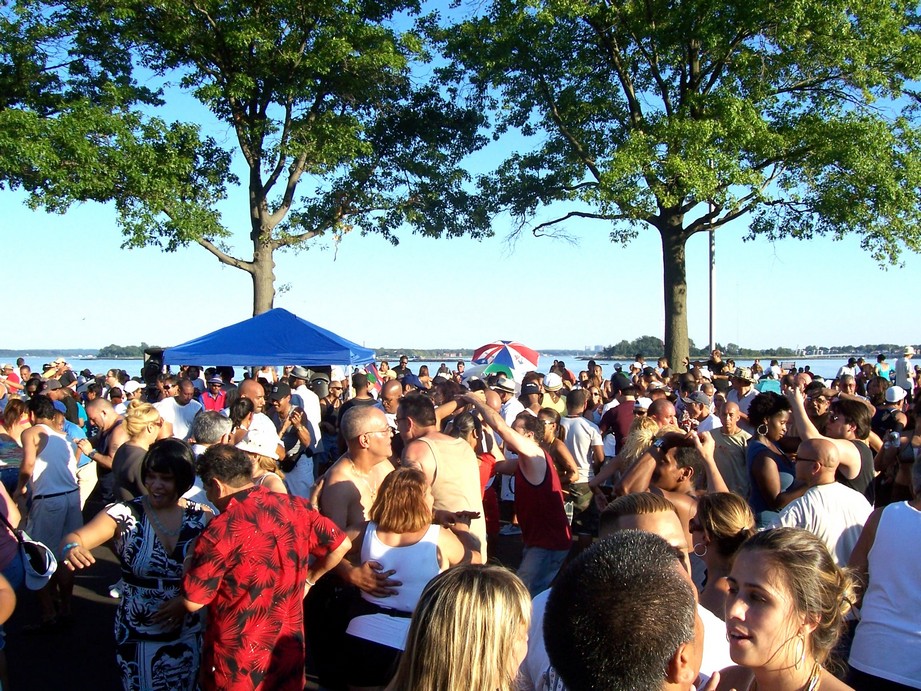 Swinging Outside For Salsa Sunday

Each summer Sunday afternoon, an empty lot at Orchard Beach in the Bronx is transformed into an asphalt dance floor.

DJs set up their equipment and play Latin music greats like Oscar D'LeÃ³n, Tito Puente and Celia CruzÂ—music that once dominated the city's dance club scene. And fans of the music unfold their lawn chairs and set up coolers stocked with snacks and beer, ready to enjoy the show.

For about 50 years, the Bronx's only beach has hosted the so-called Salsa Sundays, a chance to mambo, cha-cha and take in the music that has become a reminder of another generation.

"The music we play here, it's almost forgotten but we're not about to let that happen," said Joseph Santiago, 55 years old and one of three DJs who has kept the party going throughout the years. "That's why a lot of people come here, because they can hear classic songs," said Mr. Santiago, who is known as "Joe Mambo" and lives in Flushing, Queens.

The late Ernie Ensley, credited as the creator of the dance parties, first heard that music as a black teenager from the Bronx in the 1950s venturing to venues like the Palladium, Village Gate and El Hipocampo. Mr. Ensley was a natural, his friends say, and was soon hired as a dancer at the Palladium.

"He was such a smooth dancer," recalled Edith Rodriguez, a 70-year-old retired interior designer who has attended Salsa Sundays since she was a teenager. "He was elegant in white tails. To see him dance in his tuxedo was a pleasure."

Mr. Ensley quickly became a trusted friend of many salsa musicians and began recording their live performances. It wasn't long before the dancer was inspired to share his music, fashioning an ad hoc DJ station out of car batteries, a converter and speakers atop a shopping cart, setting up his contraption on the beach to draw groups of people eager to dance.

"The guys would stomp on the sand until they made it hard so they could have a dance floor," recalled 70-year-old Millie Cruz, who has danced at the beach since her girlhood.

Eventually Mr. Ensley acquired city permits and moved his party to a nearby lot. Before he died last fall at age 76 of diabetes complications, his friends took him to his very last Salsa Sunday in August. By that time Mr. Ensley had already had a leg amputated. Friends say he was transported from the nursing home by ambulance to Orchard Beach.

The lot was packed with people and surrounded with banners that read: "Welcome Home."

And Mr. Ensley's dancing legacy continues on with full community support. Hector Aponte, the Bronx's Parks Commissioner, frequently makes an appearance in his shorts and sports jersey to watch the dancers.

He said the city charges an annual $25 fee to obtain permits for the weekly event. "The whole Bronx wants to keep this going," he said. "Starting from the borough president and down."

As a young man, Mr. Aponte said he had the salsa bug. His Saturday late nights were spent with friends at dance clubs, then the group would sleep on Orchard Beach at dawn, before joining the Salsa Sunday crowd in the late afternoon to mambo yet again.

At the al fresco ballroom, men lead women to the dance floor, and old ladies gossip and sing along to the familiar songs. It's not long before more than a dozen couples are whirling and twirling.

Many types of dance steps and styles make up this dynamic music tradition, which draws its influences from Cuban, African, Caribbean and other cultures. At Salsa Sundays the group mostly sticks to a simple six-step mambo (left, right, left, pause, right, left, right).

In the stifling heat, Frank Rivera, 54, mamboed with his girlfriend Olga Berrios, 50, and held her close. "Things change but salsa never changes," he said. "The only thing that changes is I'm older now."

Special thanks to salsero Amir Shimoni for design and technical help in the creation of these events pages.
See his web site www.MamboPics.com for photographs of the people, events and performers of the New York & New Jersey mambo scene.

All correspondence regarding this web page should be directed to co-host/webmaster Steve Shaw.